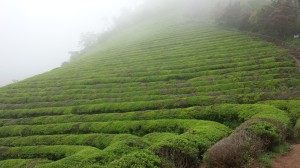 I visited Boseong Green Tea Farm in South Korea at the end of May, 2013. The trip took 1 hour and a half from Yeosu, a city on the southern coast of South Korea. If you are leaving from Seoul (by the way, pronounced as soul), then it would probably take around 4 hours. 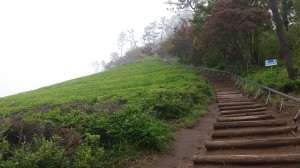 Anyways, I had hired an english-speaking driver to take me there, who also acted as my guide.  🙂 Because of its speculator scenery, a popular South Korean tv series is shot there. I bought a ticket and went to take an amazing walk between the green tea plants. The weather was nice. There were two path. I took the hardest one and most rewarding in terms of scenery. You would have to climb up the stairs. It had a speculator view of the green tea fields and the fog. I was thankful that I was wearing my nike shoes because the stairs were sometimes  steep and you would have to be careful. The path included climbing up 800 meters worth of stairs. I think the total path was between 1.6-2km long. It was very tiring but definitely worth it. At times I was so tired, I couldn’t climb up anymore and there weren’t any place to rest. The stairs were so steep that I couldn’t stand still on them so I would end up hugging a tree to support myself.  😆 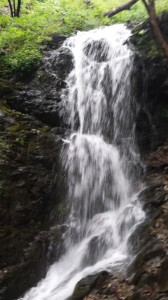 When I reached the top, there was a bench which I sat on to rest. After enjoying the scenery of green fields of tea plants and taking deep breaths of clean air, I decided to climb down. The climbing down was easier however kind of tricky as the path was steep and it was filled with wet rocks.  While climbing down, I was wondering why the rocks were very wet and slippery and it turned out there is a waterfall near by. We passed right next to it and actually at some point had to cross its river path. It was really beautiful. Of course my nikes shoes got wet and I almost slipped a couple of times.  I was told that the water from the waterfall waters the tea farm fields. 🙂

Close up of Green Tea leaves

When I reached down, I decided to check out their tea stores. They offered different grades of green tea leaves and tea bags. They explained to me that tea plants are harvested 3-4 times a year and the best harvest happens at the of April. April Harvest is considered the most valuable and tasty.  Furthermore all products they sold came from the same farm and it isn’t commercially available. If you want to buy their tea, you have to physically visit the farm and purchase it yourself. I tried their April harvest. It tasted wonderful and not bitter at all. In fact, It was yummy. I also tried their home-made green tea ice cream. It was good as well. I ended up buying more than 20 boxes of green tea. It was definitely worth it. I have yet to drink green tea that has similar quality to the one I bought from them. One spoon of 1st grade green tea leaves can be re-used for 3-4 times and the 2nd and 3rd time are considered the best drink. 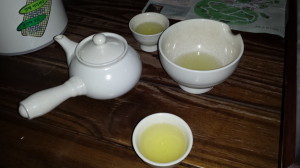 At the store, I was treated to Korean way of drinking tea. They put the leaves into the teapot and pour hot water (around 70-80C) in it and let it simmer for 1 minute and then pour everything into a bowl. Then they pour the tea from the bowl to the tea cups. This is why the their tea is never bitter.  They re-filled the teapot several times with hot water as the leaves can be re-used 3-4 times. I actually bough a Korean set from one of the stores.

At the end, it is one of memorable trips I took in my life. The scenery was breathtaking and the work-out was so worth it. If you are ever planning to visit them, wear rain shoes or shoes made of rubber so they won’t get wet when you cross the waterfall side 😀